You are here: Home > chaparral

Chaparral gardens are appropriate for sites with full sun, little or no summer water, and well drained, often rocky soils. Besides a plethora of evergreen and semi evergreen shrubs, a number of perennials bloom in spring and summer.

Plants for this community are some of the showiest of our native flora. Salvias, such as purple and white sage, are particularly attractive: not only to humans, but also to pollinators. Rich in texture, color, and fragrance, natives from the South Coastal Sage plant community provide a rich palette for a Mediterranean garden. Ideal settings are hillsides that face south or west with a coastal influence. Choose from Buckwheats and evergreen shrubs like Summer Holly and Lemonade Berry.

This garden surrounds a typical southern California Mediterranean-style home located in a cul-de-sac. Appropriate to the location’s south/west exposure, a blending of three plant communities creates a distinct garden style. Shade from the hot sun at the entry is provided by a California Grape vine, which occurs naturally along streams and rivers (a condition known as “riparian”). Manzanita is used as the dominant shrub for screening and accent. A Chaparral plant, Manzanita is available in many species and selections. Other plants such as Summer Holly and several species of Buckwheats are members of the South Coastal Sage plant community and are used extensively in this garden. With the exception of the California Grape, this garden requires little summer water.

A small, fast-growing evergreen shrub with fragrant, rosemary-like leaves. It features bright wooly blue and purple flowers attractive to hummingbirds, and blooms for several months. It is excellent in a chaparral planting. 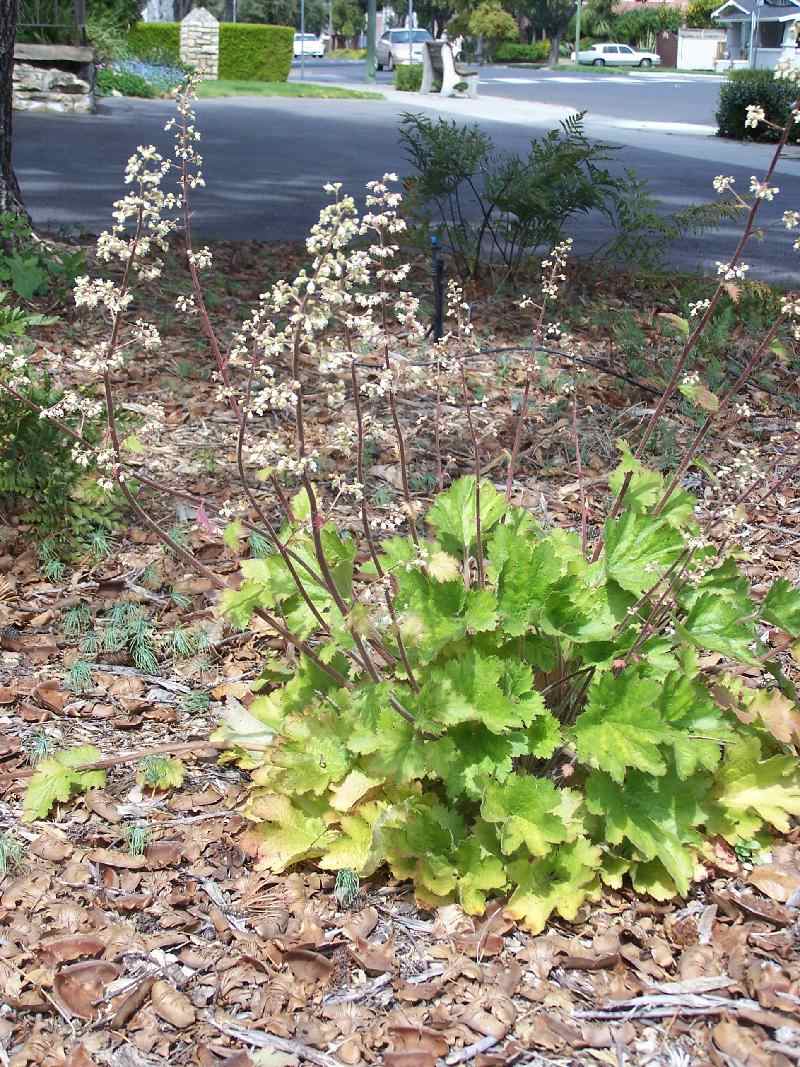 Heuchera or Alumroots are often commercially known as Coral Bells. There are many heuchera native throughout North America, but many beautiful species are particularly endemic to California. Heuchera [who’ ka ra] are often commonly called Alum root or Alumroots.

A large version of coral bells, to two feet tall, with bold rosettes of nearly round, scalloped leaves and panicles of creamy, bell-shaped flowers is endemic to the Channel Islands, but does well in many shade gardens in the San Francisco Bay area. It blooms in spring and early summer. Older plants may develop conspicuous woody stalks below the tufts of leaves. Cut them off and use to start new plants.

Heuchera micrantha, Common Alumroot, is effective massed, especially with other selections of heuchera. Excellent under oaks with native bunchgrasses.

Clumped perennial from woody rootstocks and rosettes of round, scalloped leaves, often prettily marked with purple veins. Airy panicles of tiny, bell-shaped white or pink flowers to two feet high in mid to late spring. Great massed on a steep slope or used in quantity as a coarse ground cover. Many hybrids and cultivars are available in the genus. Low maintenance. Propagate from divisions of clumps or seed.

Heucheras come in all sizes and color variations. Such species as H. micrantha and H. maxima (island alumroot) provide pleasing results in the garden. I also like to mass ‘Wendy or ‘Canyon Delight’ under oaks or mixed with California Fescue, Douglas Iris, and Western Sword Fern. 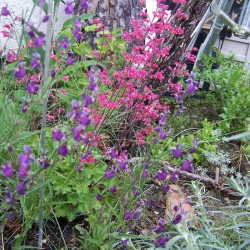 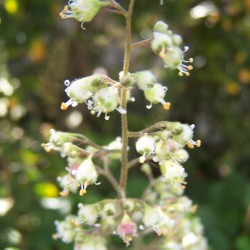 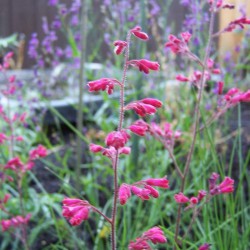 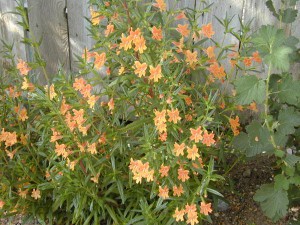 The Monkeyflower comes in many colors. The native monkeyflower is Mimulus aurantiacus or Sticky Monkeyflower. This monkeyflower is commonly found throughout California, often growing in full sun and dry rocky places. This small shrub grows to 3 feet high and blooms continually through the summer with bright orange, yellow, or red tubular flowers. In the garden, it does best with some water and good pruning after it’s done flowering. It is attractive with Black Sage, Coffeeberry, and Penstemons. Many different selections of monkeyflowers are extremely garden worthy.

Mimulus bifidus or Mock Azalea likes full sun and dry, rocky soil. It is drought tolerant, but water it occasionally for best results. The shrub grows about 3 feet high and has summer flowers ranging from yellow to peach.

Mimulus ‘Eleanor’ or ‘Eleanor’ Monkeyflower, another hybrid of our native California Monkeyflowers, has an abundance of large butter-yellow flowers from late spring through summer. It is a perennial shrub with bright green foliage and grows 2 to 3 feet tall and wide. Plant it in full sun. Although it is fairly drought tolerant, moderate water will extend the blooming period. Prune it after it stops flowering. ‘Eleanor’ is attractive planted with Blue-eyed grass and purple sage, which bloom at the same time.

Mimulus puniceus – Red Monkeyflower, although native to Southern California, is very similar to our local species in habitat and appearance. This plant, however, has a profusion of deep scarlet-red flowers which often have gold centers. It grows 3 to 4 feet tall and wide and has narrow, dark green leaves. Plant it in full sun and give it moderate water. It will produce abundant new growth and flowers if pruned annually. 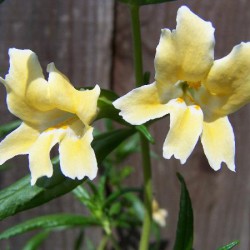 Several other monkeyflowers can be found throughout California, many of which grow only in certain ecosystems. Generally, Mimulus are found in Chaparral communities, but there are several riparian monkeyflowers as well. Mimulus guttatus and cardinalis are riparian/wetland species, which are usually found near standing water or underground springs. Mimulus lewisii is a Sierra Mountain monkeyflower, known as the Mountain Monkeyflower. Another favorite of mine is Jelly Bean, a selection of a Mimulus bifidus.

Eriogonum “When all else fails, use a buckwheat!” 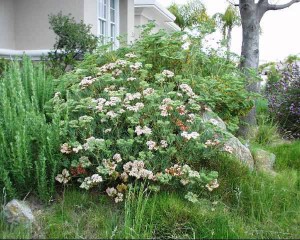 Eriogonum arborescens – Santa Cruz Island Buckwheat , a low, broadly mounded shrub, grows to three feet high with narrow, curled, evergreen leaves and flat-topped clusters of pink to white flowers in summer, and then in fall, fading to rust. Somewhat winter tender. Propagate from seed. Garden Design note: A very versatile garden plant. Flower display goes on for many months, with many stages of bloom on the plants at the same time, and has great structure when not in bloom. Can substitute for rosemary or lavender. Deer will browse it.

Eriogonum grande var. rubescens – Rosy Buckwheat  has basal clusters of grayish, spoon-shaped leaves form clumps to two feet across and 12 inches high. Long succession of pale pink to ruby red flowers on naked stalks to two feet high in summer and early fall. Propagate from semi-hardwood cuttings or seed. Garden design note: This is a very showy species when massed on a slope on mounds. Needs pruning to maintain a tidy appearance. Mix with other buckwheats and accent grasses.

Eriogonum umbellatum var. polyanthum – ‘ShastaSulfur’ Selection  is a spectacular perennial from mountainous areas forms a gray-green mound 1 to 2 feet high and 3 feet wide. In spring it is covered with round sulphur-yellow flowers. Plant it in sun or partial shade. ‘Shasta Sulfur’ needs some summer water in inland areas. 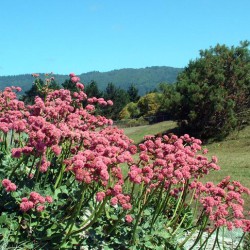 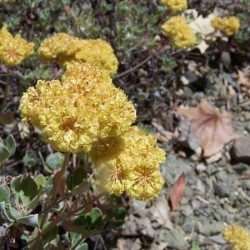 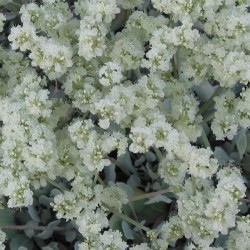 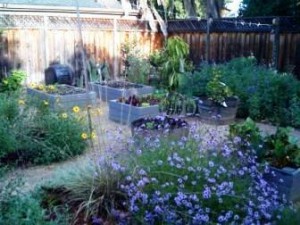 The dry summer California native garden can look a little drab and forsaken unless you include some late summer flowering gems like grindelia, tarweed, goldenrod, numerous buckwheats and lilac verbena.

Lilac verbena is native to Cedros Island, the fourth largest island in Mexico and situated in the Pacific off the southern coast of the Baja Peninsula, a little over 300 miles south of San Diego. Cedros Island was inappropriately named after cedars. Spanish sailors, as they explored  California’s rugged coastline, mistook an endemic pine related to the Monterey pine for a cedar. Cedros Island is bathed in fog many days of the year.

Lilac verbena will bloom its heart out without interruption until it dies. If you wish to prolong its life, cut it back hard after its first flowering period. It will regrow quickly. You’ll be rewarded with another very long blooming period. We usually let it rest for 6 weeks to two months each year. Young plants will often be blooming up to Christmas and beyond.

We like to cut them back in August and September. Then, they can regrow quickly before cooler weather and slower growth sets in. Plants that grow this fast tend to be short lived. That’s why it is especially important to force them into dormancy with a hard pruning.

Lilac verbena attracts many butterflies. It has a sweet fragrance and also performs well in a container, if the soil is rich with organic material. I have seen one plant grow 6 feet wide and 5 feet tall in a season. 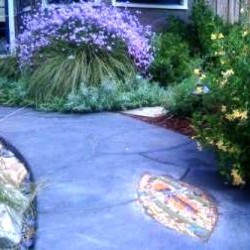 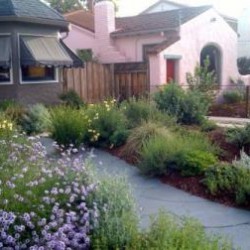 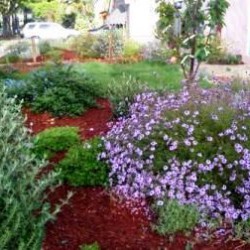 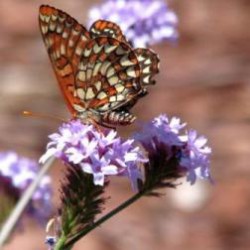 Epilobium canum ‘septentrionale’, a variety of California Fuchsia, is a north coast epilobium, native to Humboldt, Trinity, and Mendocino counties. A small-scale groundcover with silver/white leaves, it is used to the cool, foggy north coast. In hotter climates, this species needs afternoon shade and may burn in full sun. 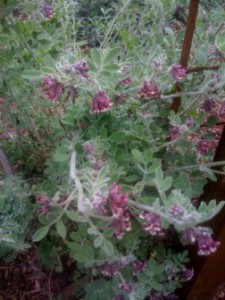 Otay Mountain lotus, or big deer vetch, is a rare and endangered California endemic that naturally occurs in the Otay Mountain region of San Diego County. It grows in chaparral, but has also been found growing on disturbed sites and following fires.

It’s a great size for a garden plant, growing quickly to 3′ x 3′. From time to time it is available in nurseries. In the future, we will regularly have this species at Middlebrook Gardens Nursery as we are beginning to propagate it from our stock plants.

When an endemic is endangered or rare, I think we should try to propagate it, so that if the natural populations are threatened, at least we are continuing to grow it in our suburban chaparral gardens.

This giant vetch is growing with two species of manzanita and Bolander’s phacelia. I planted it on a constructed mound, where it receives full afternoon sun. It has a full bloom in March and then will flower off and on until November.

When you cut it back, it fixes nitrogen like most pea family plants. I’m always interested in nitrogen-fixing plants and especially combining them with composites and grasses. This plant reminds me of lupines and I think it would be wonderful to combine it with chaparral lupine, lupinus albifrons. They will bloom at the same time. Go Otay! 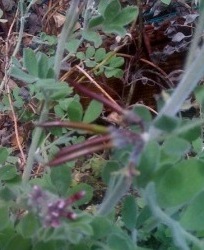 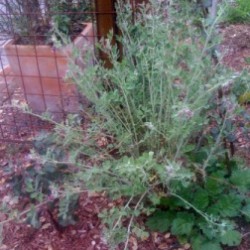