You are here: Home > Our work with Willow Glen High School.

On July 2015, CNGF has just finished our work with Willow Glen HS on their school garden, in collaboration with science teacher Mr. Bursch. We focused on improving their irrigation, shade house, and building a chicken coop. Before we came in the garden was in somewhat of a state disrepair. There was no chicken coop, the hoop house that the students wanted to use as a shade house for propagation was falling apart and in disrepair. 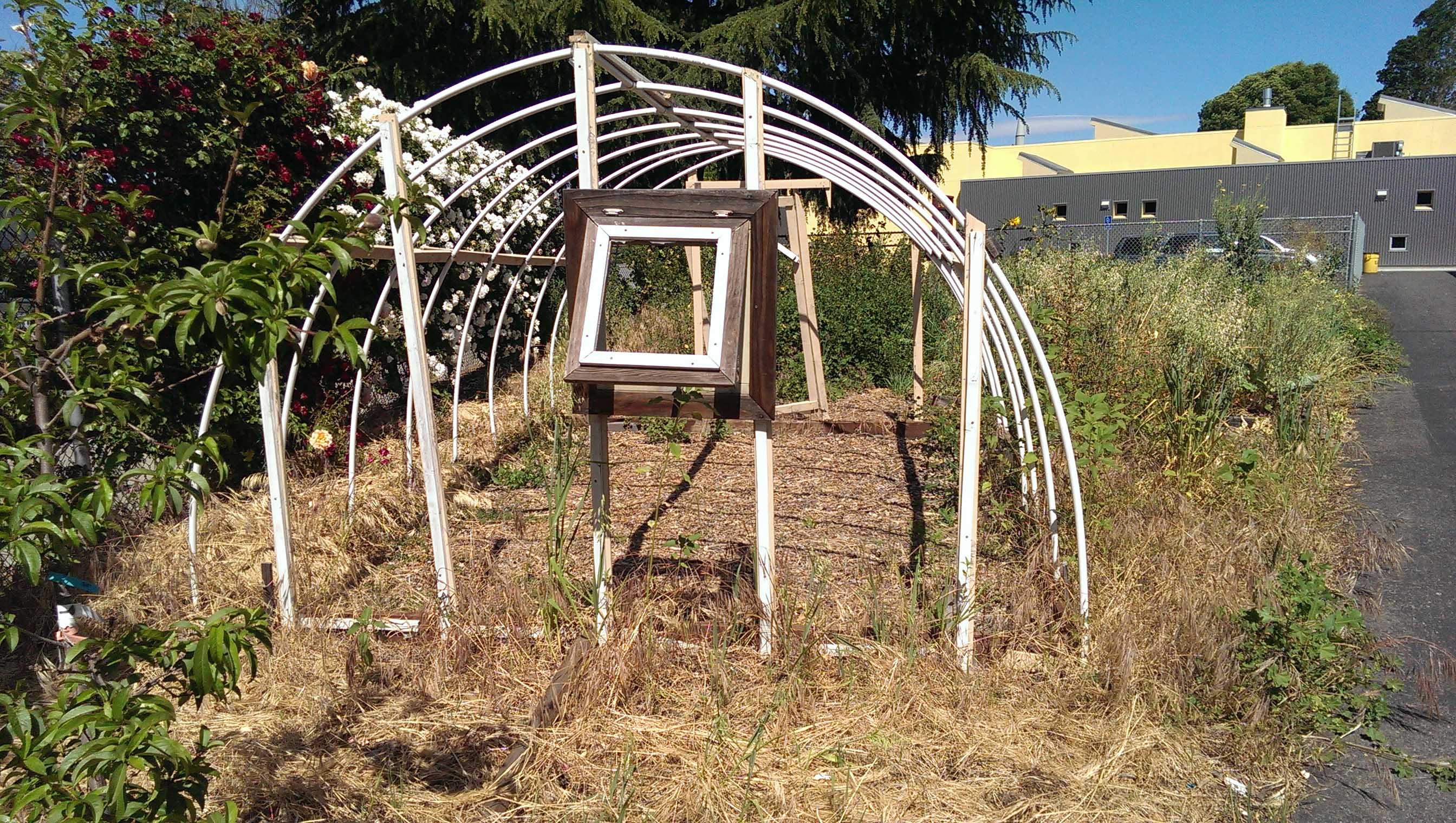 The garden and hoop house before.

Their existing irrigation system was inefficient and time consuming to say the least. At the time they had to carry a 100ft roll of hose 100ft away to the faucet and then winding it back up when they were done, a difficult and tiring task to do every day. Running a direct underground line would have been an order of magnitude more expensive and would have require difficult to get permits so we and Mr. Bursch came up with a creative solution. We ran a pipe along the fence to connect the valve near the garden to an opening near the water line. With the new pipe the students only has to connect a 10ft line to connect the pipe to the water source.

New irrigation valve, no more running a rose to the grey building in the back

At the garden end we had storage for the main hose so no one has to lug the long hose back and for the. The storage for the hose was also an exercise in improvisation we figured we had to have a strong storage box for the hose; we had thought we would have to build a strong wooden box or buy a metal box and chain it to the fence to secure the hose near the fence so it wouldn’t get stolen. However we figured that we could use a metal trash can and chain it to fence. It may not be as pretty but it work and saves us lot of time, effort and money.

The next project was the hoop house. Mr Bursch wanted it as a shade house to help propagate more delicate plants. The existing setup was too flimsy and was falling part. This was a great project to get the kids involved. The boys got really into the drilling .We took apart the old reinforcing braces and added new one. Then we got shade cloths and spread that over. 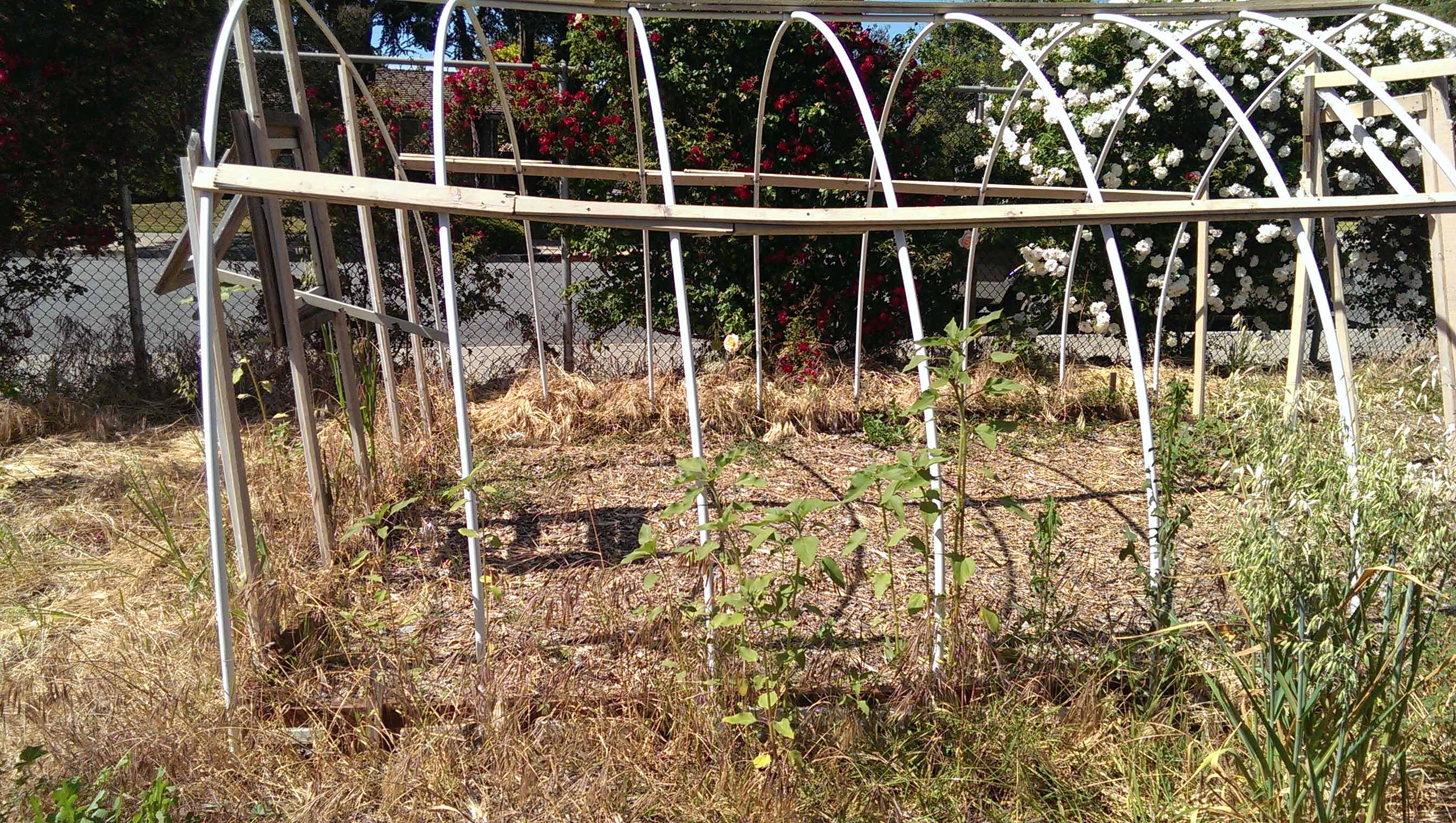 The hoop house built with scarp wood and falling apart. 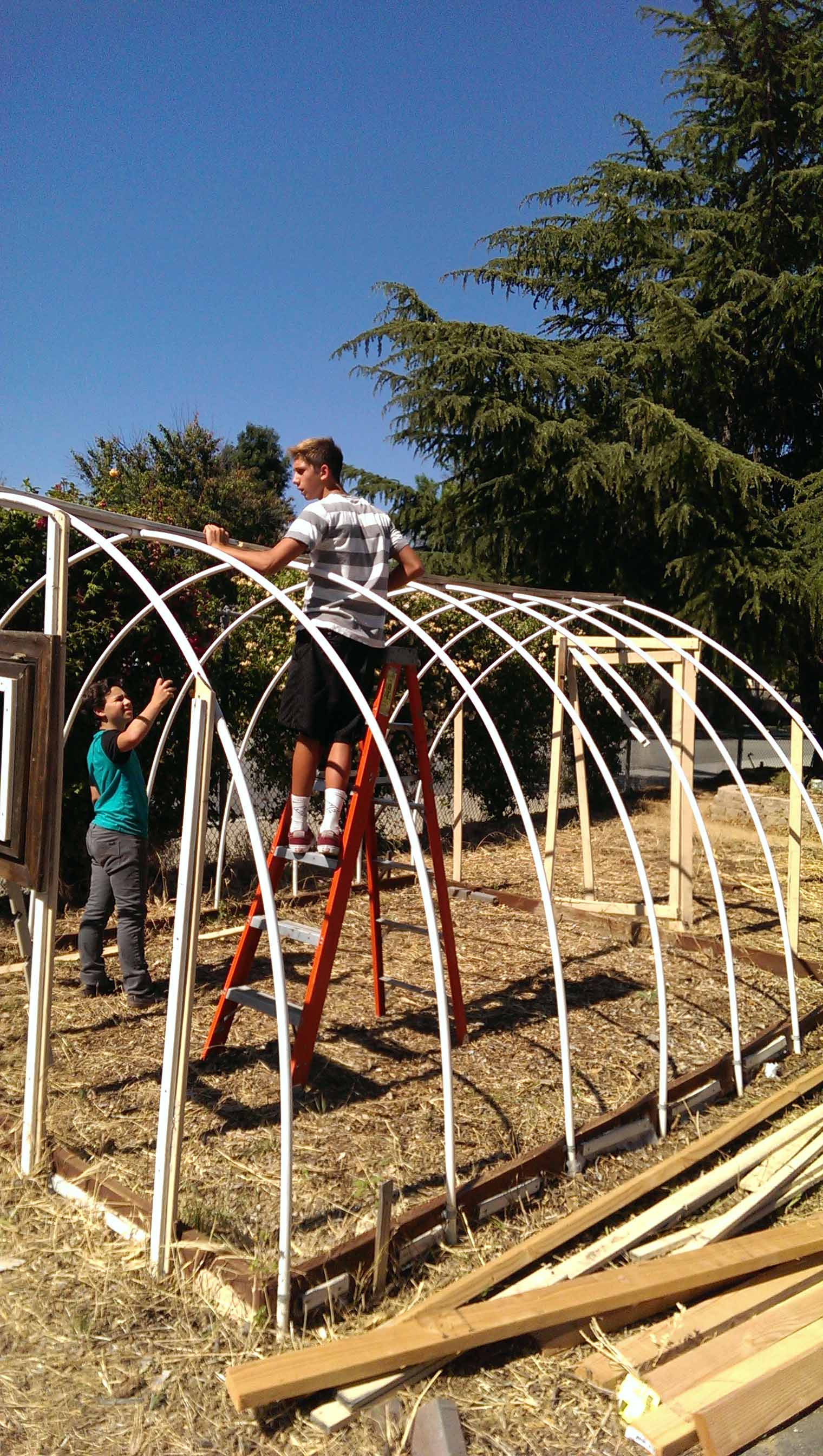 The centerpiece of the garden was constructing a chicken coop for the chicken that the class wanted to keep. This was the hardest part of a project and took the lion’s share of the time and effort. The kids came and helped out when they could. There was quite a few miss estimation of the work, so some phases took longer than expected but Aaron, and his girlfriend who volunteered, and I compensated as best we could. Eventually after the few small steps back and rebuilds we finished and the Willow Glen HS now has a beautiful new coop that they can keep their new chickens in. 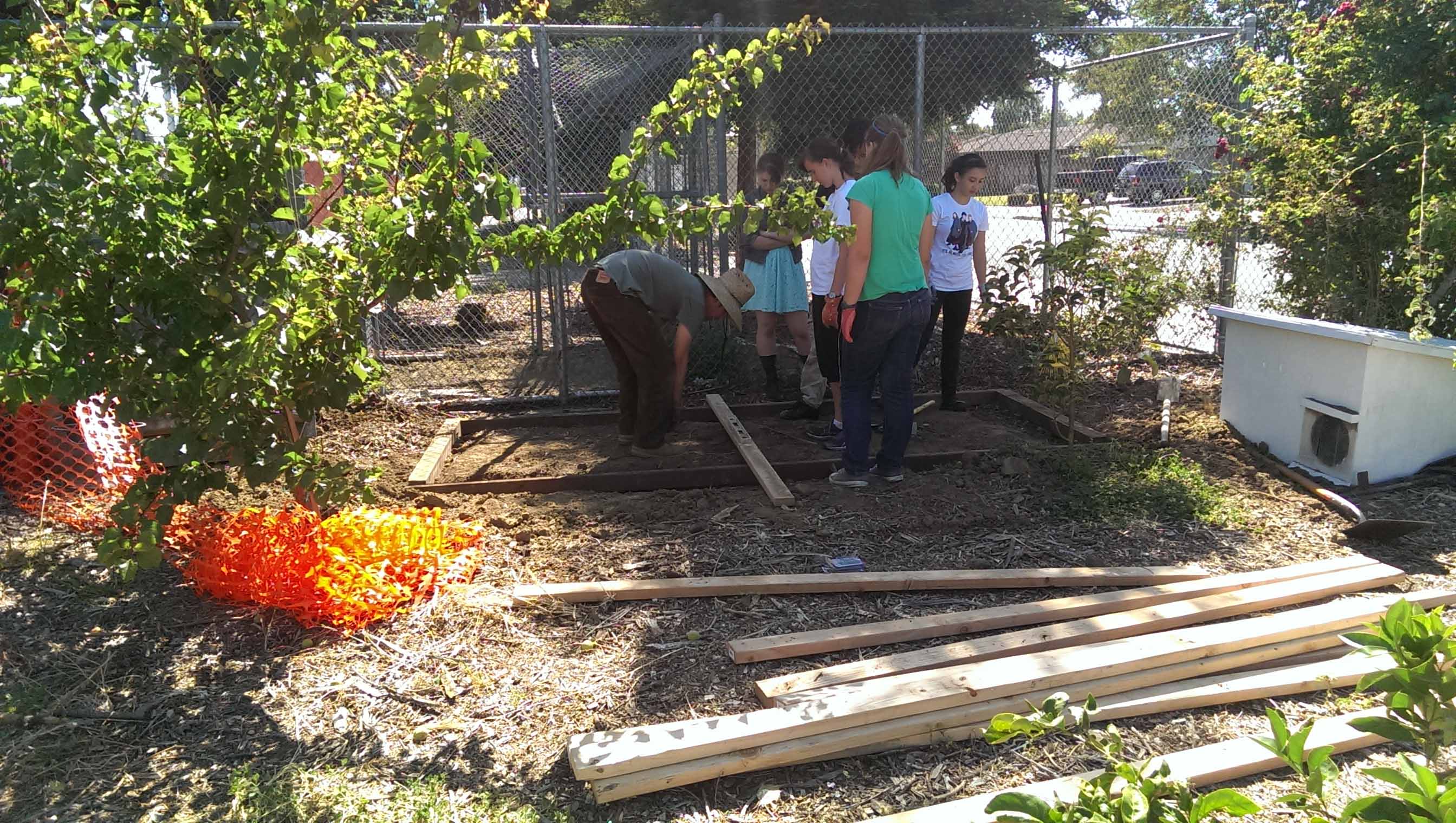 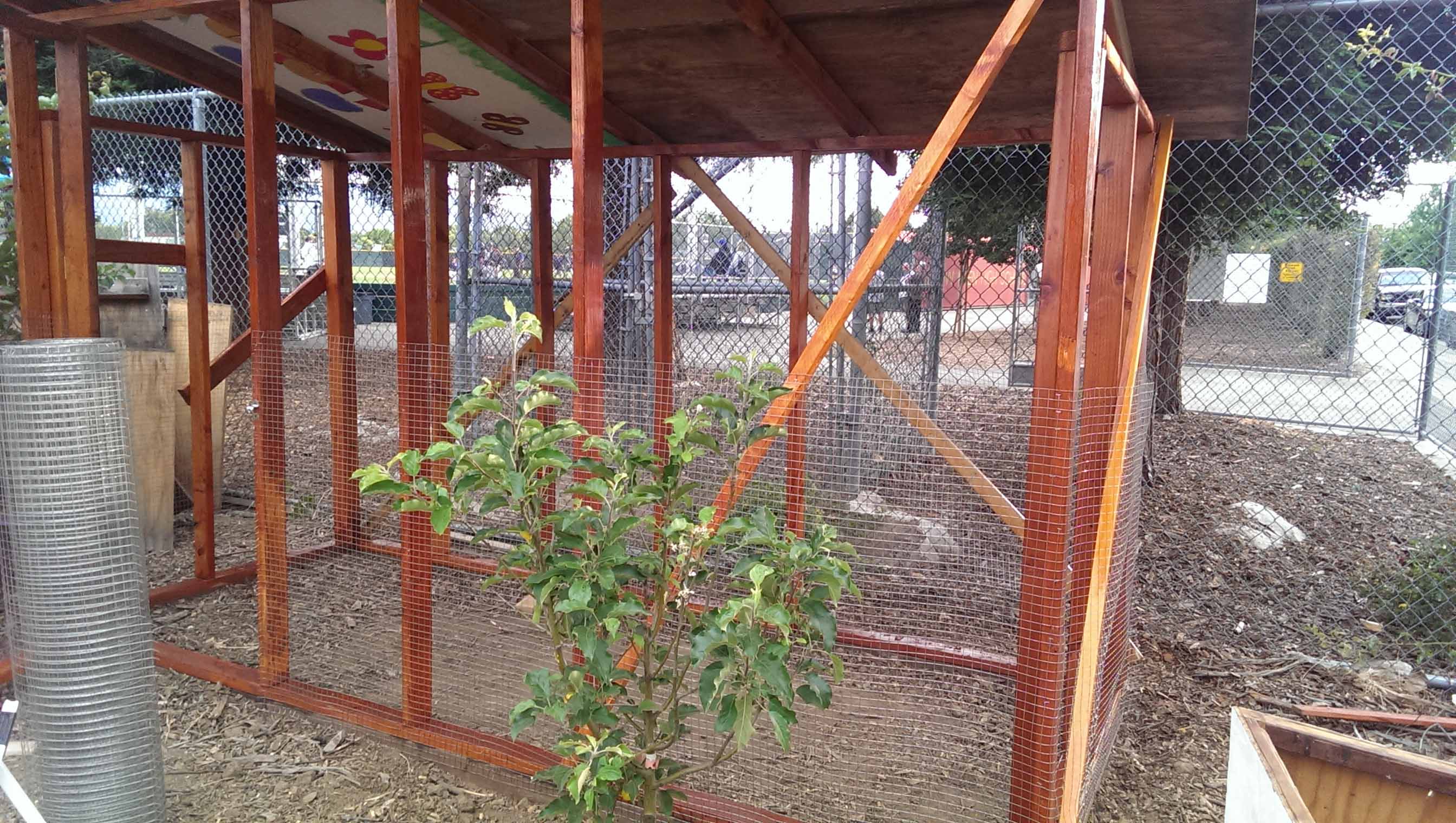 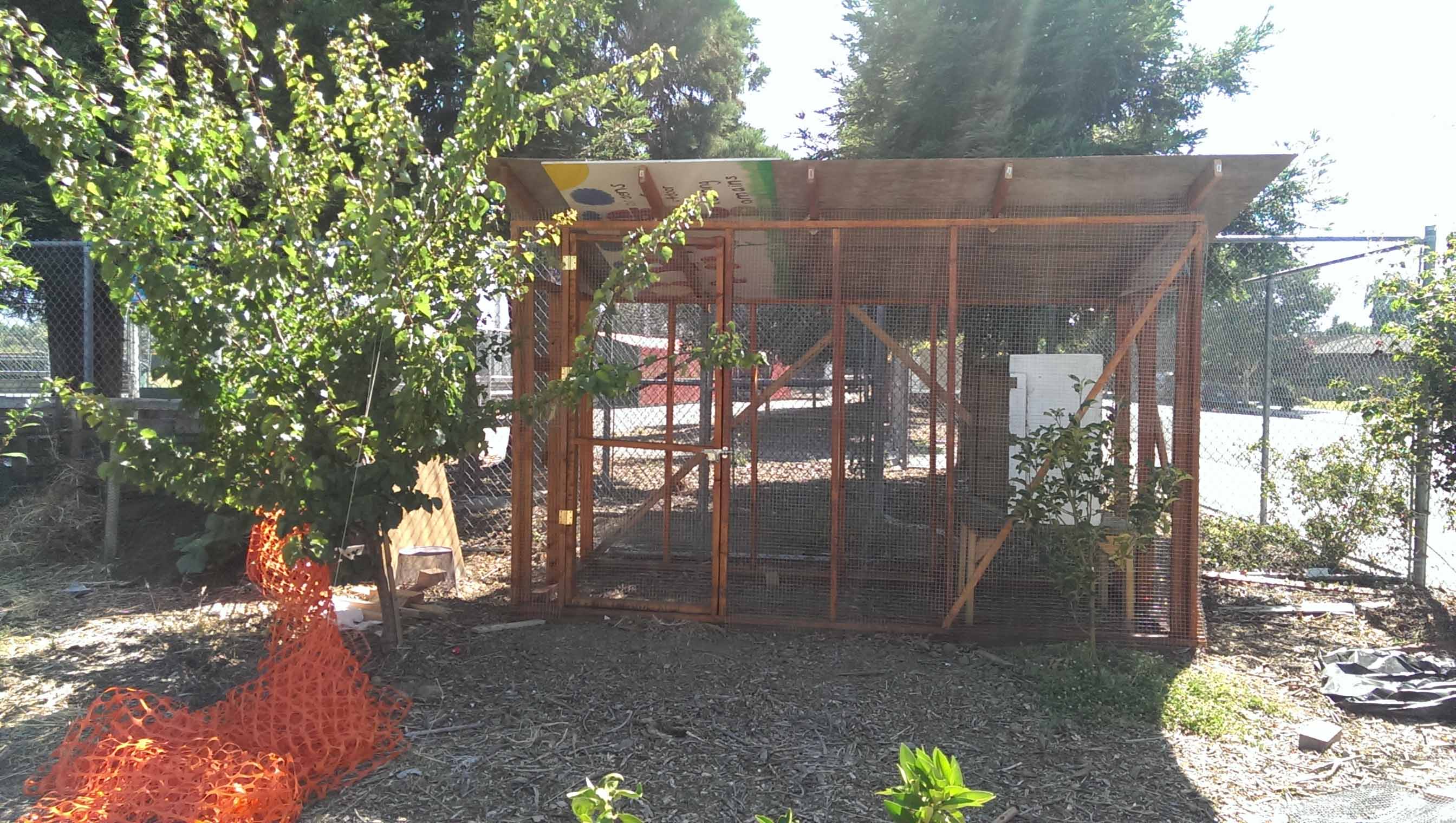 We checked back in on the garden at Willow Glen this November. 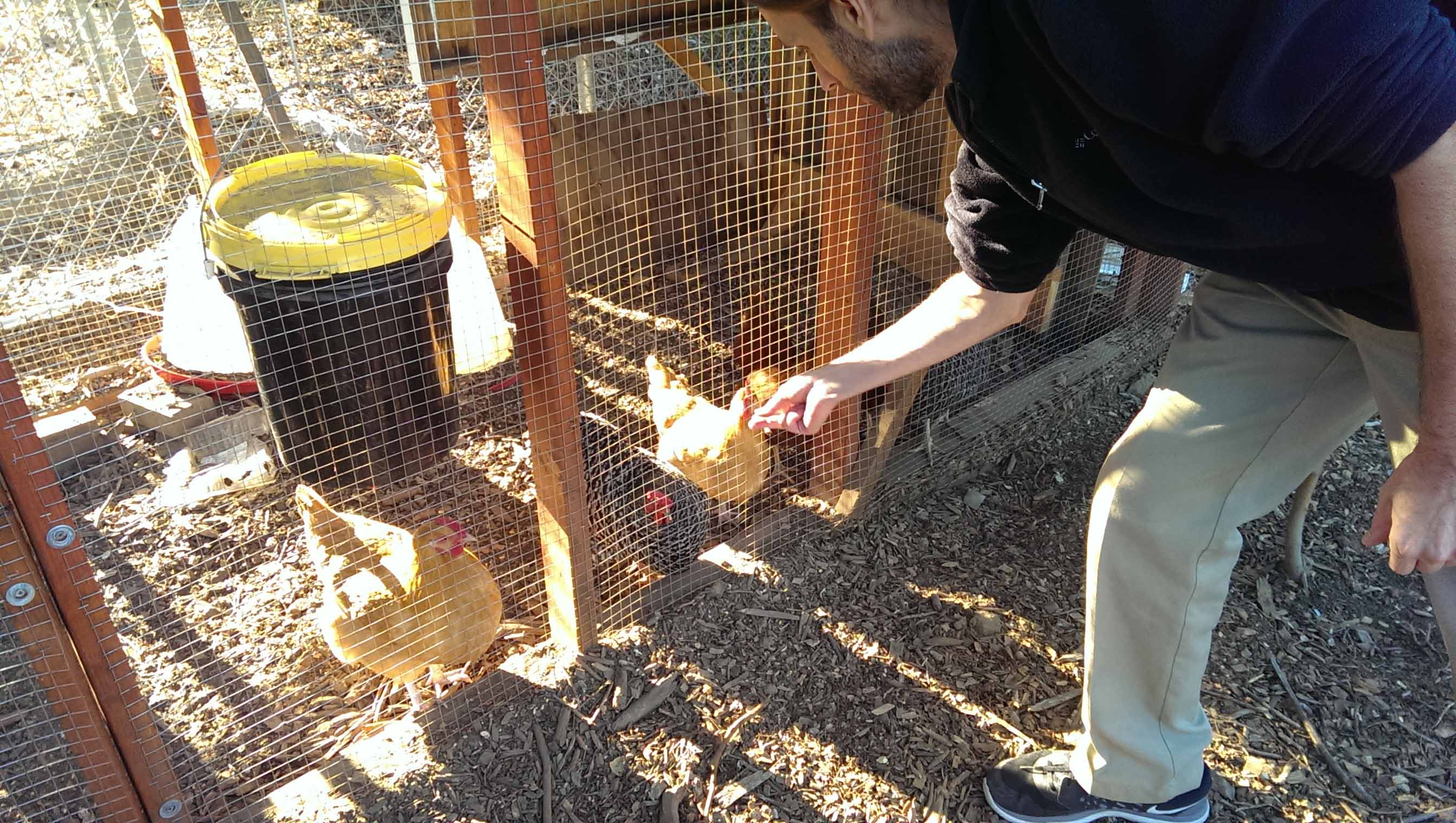 The Coop in good condition

Willow Glen Chicken coop has been holding up well there was a little problem with the roof leaking but its minor and easy fix.The important thing is that the chickens are fat and happy. And Fat and happy chickens make lots of eggs. Between the 6 hens the class collects around 30 eggs a week. 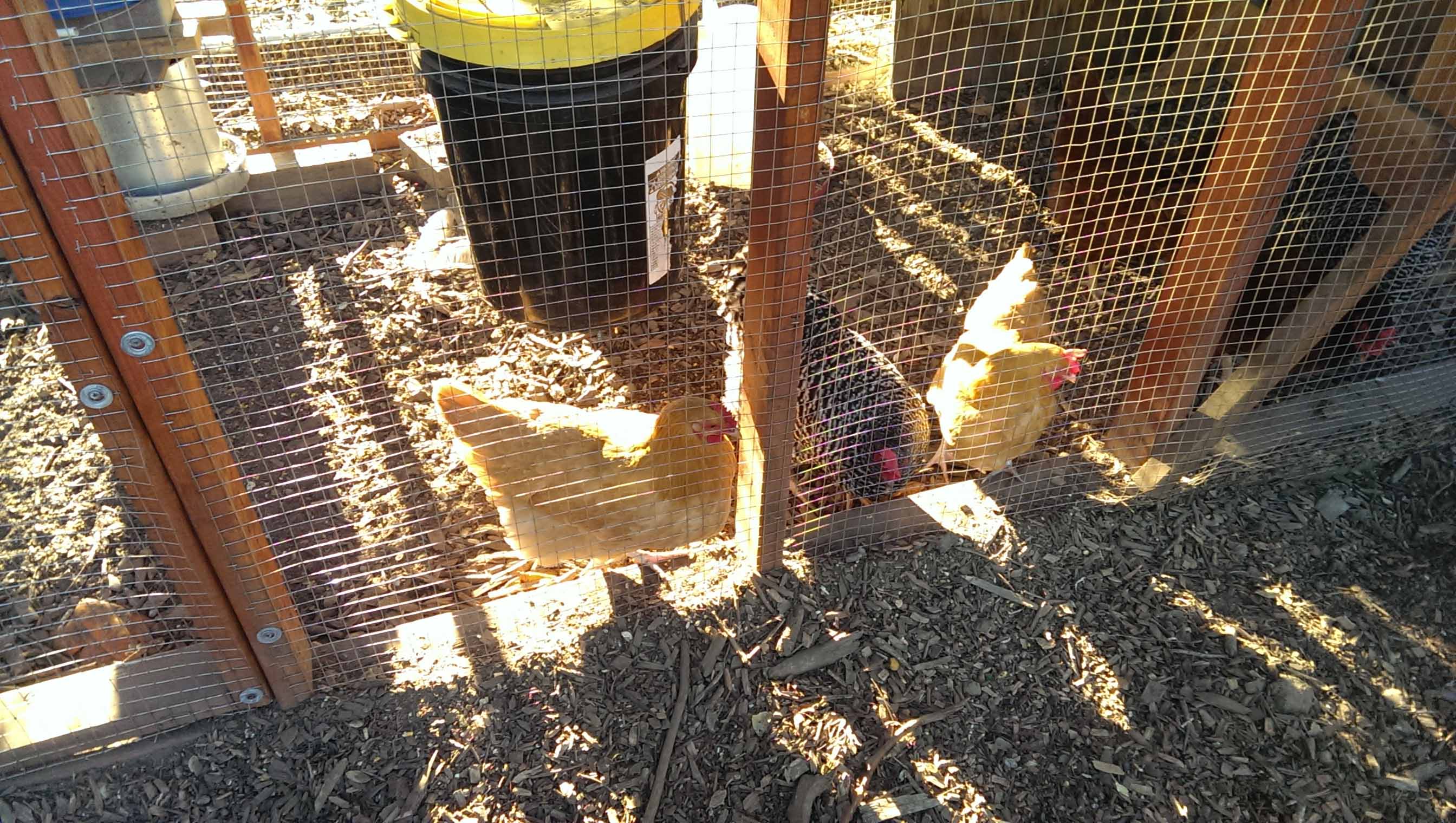 The chickens are fat and happy. 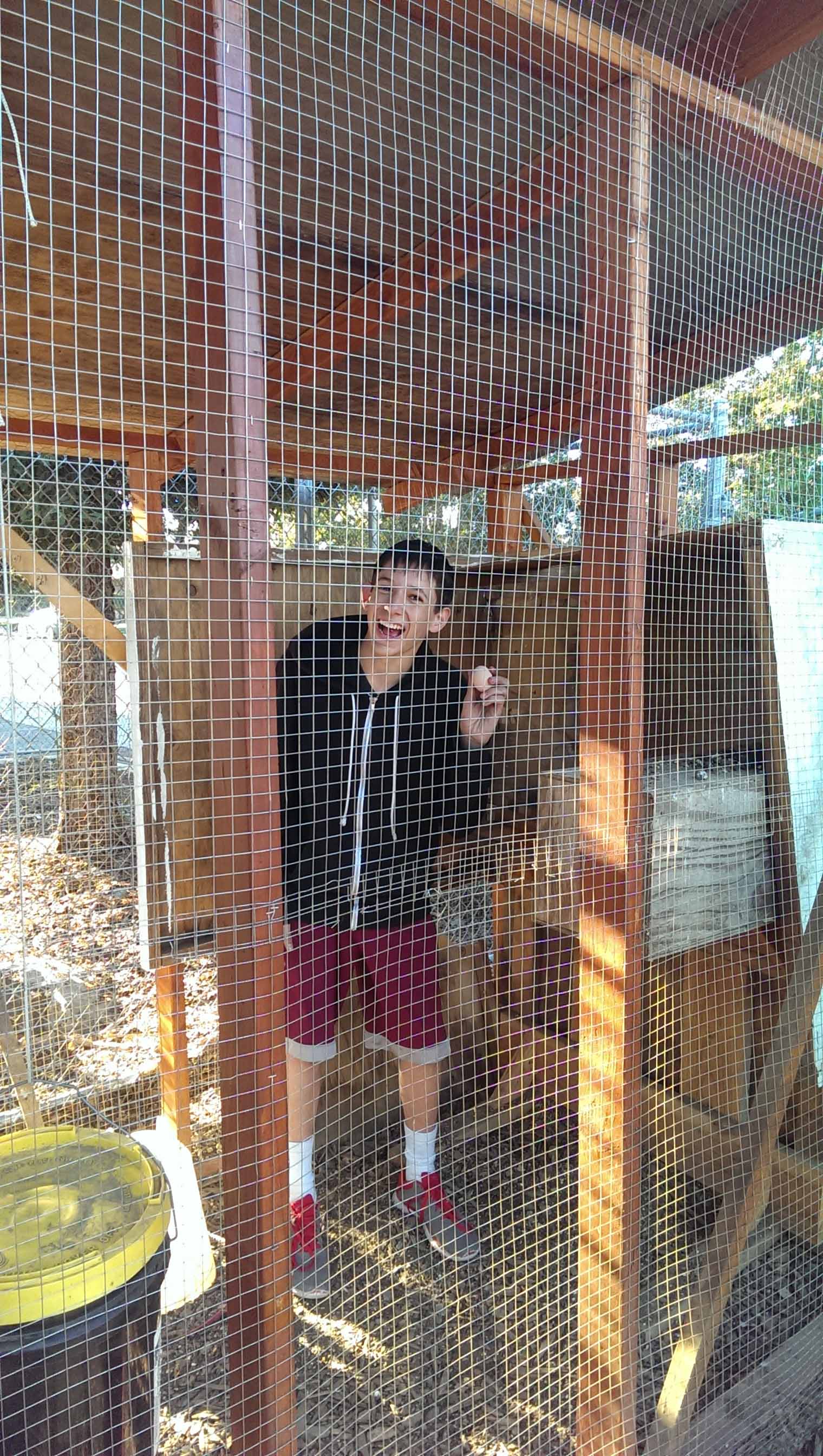 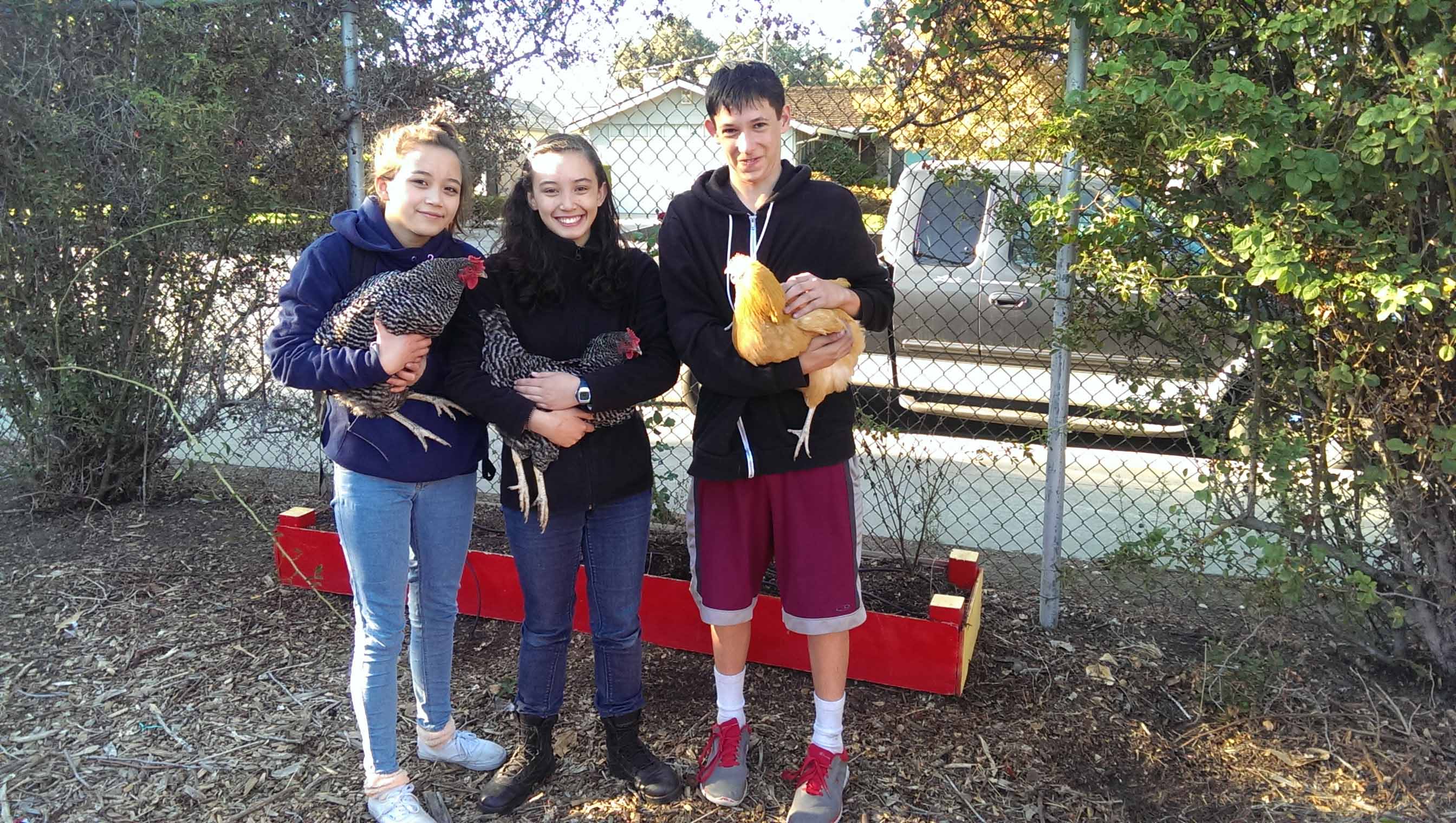 The kids get along with the chickens really well.

I am an employee at the CNGF, I just finished my degree in marketing from SJSU.