You are here: Home > Lab Report 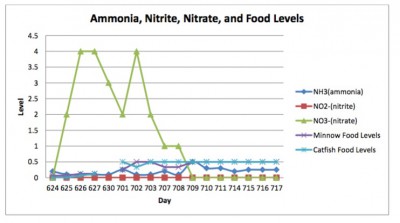 Intern Elizabeth typed up a lab report analyzing our data collected from the first month of summer, cycling our system at DCP:

Introduction
The purpose of the analysis of this data is to observe the cycling relationship between the levels of ammonia, nitrite, nitrate, and fish food in the aquaponics system at Downtown College Prep (DCP) in San Jose.

Observing these three levels will allow aquaponics users distinguish a functioning system from one that may need some care. Interns measured data from the aquaponics system almost every weekday.

Cycling begins with ammonia. Ammonia (NH3) is a compound that is toxic to fish and will kill the fish in the system if it is not converted to a less toxic form of nitrogen. Nitrosomona bacteria convert the ammonia to nitrite ions (NO2-).

Nitrites are even more toxic than ammonia, but another type of bacteria, nitrospira, convert the nitites into another ion,nitrates (NO3-). Nitrates are what give the plantsa source of nutrition. In an ideal aquaponics system, we expect to see successional maximum and minimum values of ammonia, nitrites, and nitrates in the respective order.